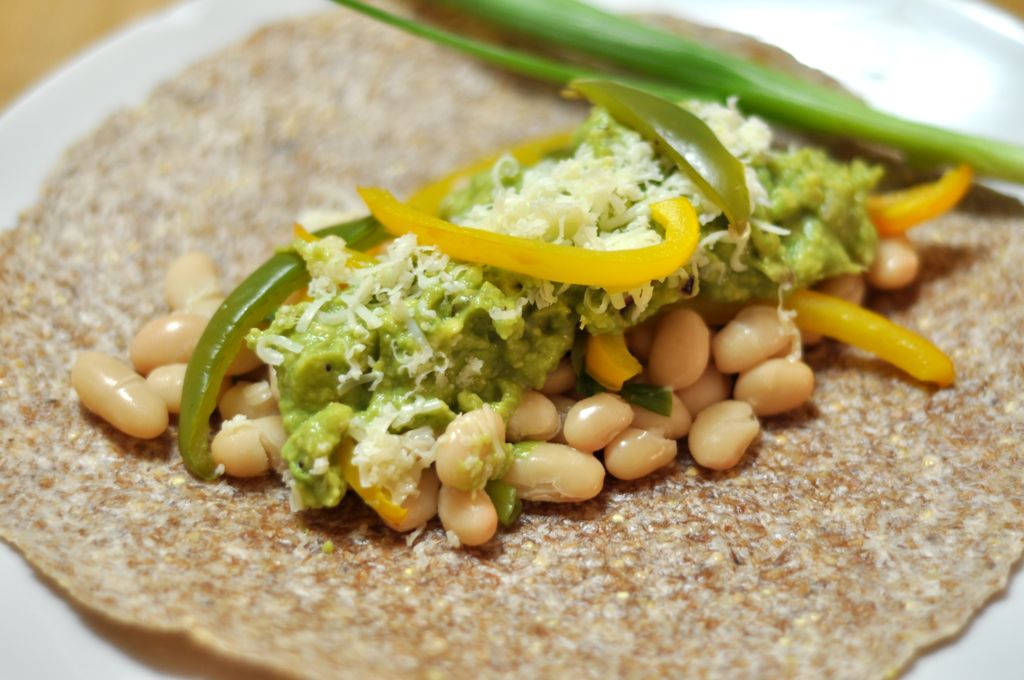 An old friend came over for dinner last night and he happens to be just as health conscious an eater as I am these days.  I had a hankering for veggie burritos and when I mentioned my idea to him, he expressed more excitement than I could ever expect, so burritos it was!

I had the idea to use white beans as the meat of the burrito so I started with that.  My friend had recently made her guacamole recipe for me and it was the best I have ever tasted, so I knew I would be including it.  After a quick trip to the grocery store, I decided to keep it simple and just add some green and yellow peppers and let the beans and guacamole take the lead in this one.  In the end, this turned out to be one of my new favorite meals and it received the health conscious friend and roommate approval too.  Here is how I made these guys…

Chop peppers into slices and place on a baking sheet and bake for about 15 minutes at 325 degrees. If you have a large enough baking sheet, place Ezekiel tortillas on it separate from the peppers, making sure to remove after 5-7 minutes or before they start to toast (you just want to warm them up a bit).
While peppers are cooking, make the guacamole by combining the avocado, red onion, lime and salt and garlic pepper to taste. In a small sauce pan, add beans and scallions and cover and cook on medium heat for about ten minutes. Strain and discard any liquid from the beans and scallions. Place beans and scallions in the middle of the tortillas, top with guacamole, peppers and cheese.