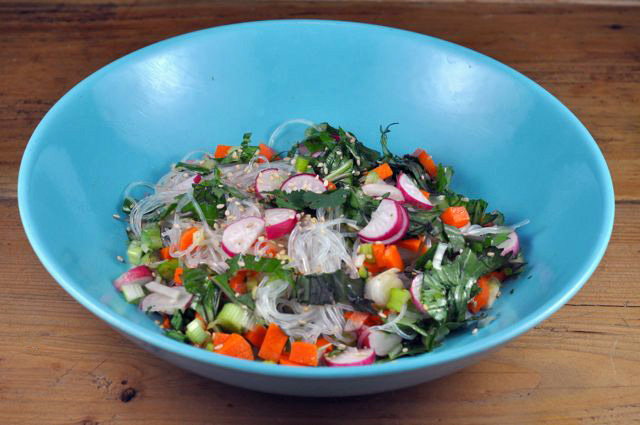 Another unfamiliar item arrived in my CSA box last week. When I opened our box of exciting new discoveries, I was greeted with a green that looked something like cilantro meets arugula. I took a bite of a leaf and was met with a flavor similar to arugula but much milder. Our accompanying list of items told me that I was chewing on something called mizuna.

After some googling, I discovered that this mystery green is commonly pickled in Japan, where it has been cultivated since ancient times, and that people most certainly enjoy sautéing it in a wok. Stir-fry recipe after stir-fry recipe finally led me to this delightful recipe for soba noodle salad with mizuna. Stricken with a cold, this refreshing salad with ginger and garlic was exactly what my body needed. I had also received cilantro and some beautiful breakfast radishes in my CSA box, so I went around the corner and grabbed a carrot, some scallions, and instead of soba noodles, Chinese vermicelli (transparent noodle made from starch (such as mung bean starch, yam, potato starch, and water). I added some lime to the original recipe as well, and was secretly hoping that this would taste just like a dish that was recently made by a certain gourmet cook at my job.  The result? My taste buds were extremely happy- all of the flavors married into a perfect dinner, very similar to the one I recently had the pleasure of devouring at work. Here’s the recipe from Clean & Delicious with a few additions…

I added:
Juice of half a lime
1/8 cup chopped fresh cilantro

To cook Chinese Vermicelli noodles, boil in water for 10-15 minutes and drain.
Combine Mizuna, cilantro, carrots, scallions, radishes, and noodles in a large bowl. In a separate bowl, combine garlic, ginger, oil, soy sauce/brags, and lime. Whisk together and pour over noodles.

Top with sesame seeds and enjoy!!