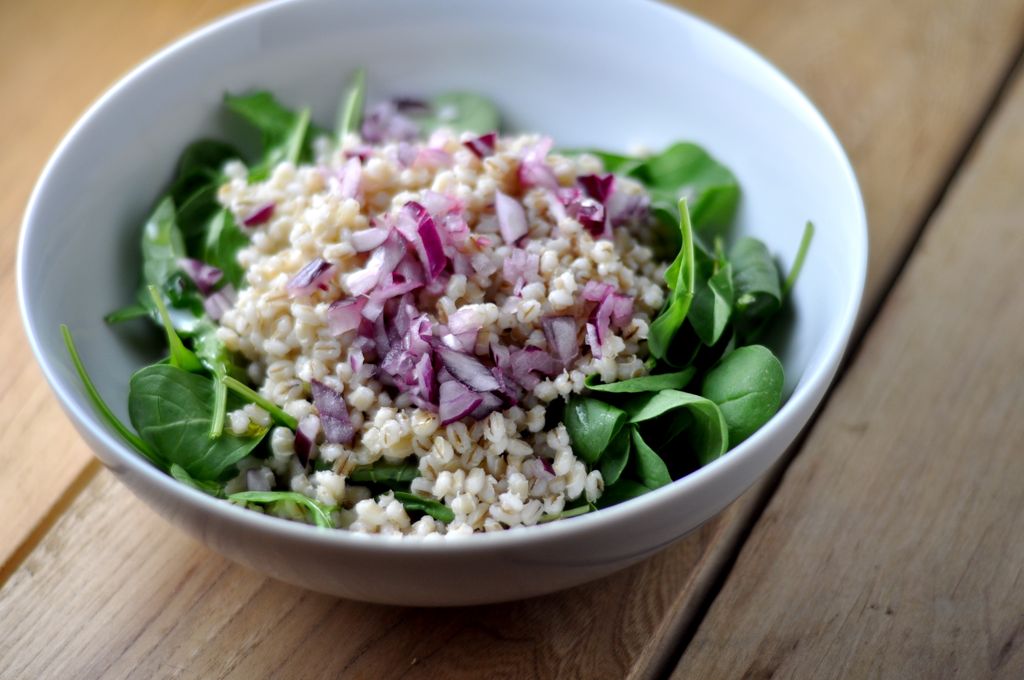 I had some barley left over from last week’s savory pumpkin and goat cheese dish so tonight I decided to go the opposite direction and use it in a refreshing salad.  I still have yet to master cooking the barley itself, but the rest of this dish was so simple to toss together.

Both times that I have attempted barley, I’ve wound up with a large layer of it sticking to the bottom of the pot. This time around, it also had more of a risotto like texture, so I strained it with some cold water when it was finished cooking which seemed to do the trick. You’ll want the barley to be cool and a slightly drier consistency.  For this salad, I just mixed in some fresh arugula, chopped red onions, olive oil, apple cider vinegar, lemon and parmesan. The only thing I would do different next time is to shave the parmesan instead of grate it. It was a perfectly refreshing dish to top off this weekend of gorgeous weather, long bike rides and family time.

Combine barley, water and vegetable broth in a medium pot and simmer for 1 hour and 15 minutes (check instructions on the pack­age of barley as it may vary). If you find that the barley comes out a bit sticky/gooey, rinse in a strainer with cool water. Once barley is cooked and cooled, combine 1 cup of barley with 2 cups of packed arugula. Mix in olive oil, apple cider vinegar and lemon. Add salt and pepper to taste and top with parmesan.